Solar company executive Dan Weeks gave some bogus advice to the non-profit he spoke of in his August 21 NH Business Review Opinion piece. He advised the company to forgo the “cost savings and environmental benefits” of a bigger solar array on their building. He wants them to run their AC more instead of having solar panels soaking up the sun from half their roof. Why? Apparently, so he can mischaracterize a state law about net metering. 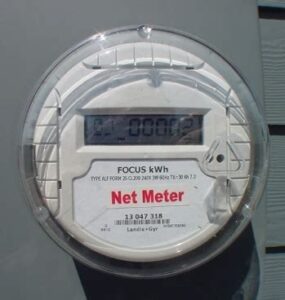 Weeks does not like the current net metering limit. Using inflammatory language about “giving away your power to the utility company” and “loss of value” and “avoid excess generation or pay the penalty,” Weeks erroneously equates the price of providing electricity service with the cost of the electricity itself. Electricity service includes fully bundled electricity supply (energy, capacity, ancillary services, risk premium, etc.), plus distribution and line maintenance costs, while all a net-metering generator provides is intermittent electricity.

Net metering subsidies were conceived primarily to encourage rooftop solar development. They were never intended to stimulate investments in larger scale systems, which nearby Maine has shown could grow to hundreds of megawatts of costly subsidized energy. A raised limit could crowd out small rooftop systems for years as the grid’s limited capacity for new connections was gobbled up. In NH, the 1,000-kilowatt limit on net metering was designed in part to keep costs from escalating.

How dramatically can such costs escalate? A recent study by the Sacramento (CA) Municipal Utility District found that net metering shifts to non-net metering customers an average $26-$41 on a yearly utility bill. A recent rate filing in Massachusetts showed that net metering has shifted over $100 million in costs – just to low-income ratepayers! Vermont’s largest utility reported a cost shift in 2019 of $33 million. Since most of that state’s solar systems are sited in higher-income communities, the Vermont Department of Public Service recently asserted that the “inequitable distribution of the benefits … makes the cost shift to non-participating customers more problematic.”

Weeks says net metering policy does not shift costs to other utility customers and cites language from a three-year-old decision by the public utilities commission (PUC) to that effect. The PUC referred in that statement to the grid’s low-penetration of small, rooftop systems. But that same decision quotes the state’s Office of the Consumer Advocate (OCA) as saying, “The OCA further argued there is evidence in the record that cost-shifting from DG [distributed generation] customers to non-DG customers is a legitimate concern that should be addressed.” The OCA goes on to assert that the PUC should “confront the question of cost shifting, at which point there would be ample data to support the proposition that customer-generators are being overcompensated at the expense of their neighbors.” Those concerns constitute the reason that the legislature has limited net metering to smaller systems.

Large solar systems already receive many subsidies, such as the 26% Federal Investment Tax Credit (declining to 22% next year). In NH, the renewable portfolio standard (RPS) also provides Class II Renewable Energy Certificates recently valued at $30 per megawatt hour and similar Massachusetts certificates, for which some NH facilities qualify, sold recently for $45 per megawatt hour. Using numbers cited by Weeks, the cost shift from net metering customers to everyone else would be 13.7 cents per kilowatt-hour, which is 80% of what regular customers currently pay for their power. Such a shift would dramatically drive up everyone’s electricity costs if the size limits on net metering were lifted.

The Governor’s vetoes of recent net metering bills, including SB159 and HB466, which the House voted to sustain on September 16, 2020, prevents these dramatic cost shifts.